"Why Eric Holder Will Not Last" 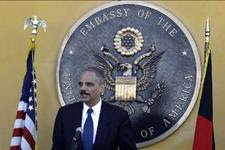 "In blunder after blunder the President has already repeatedly been forced to back away from the decision making at the Justice Department. But the trail of disasters has left legal litter for the administration to clean up in even more ways than they could have predicted.

Holder has overreached so many times people have begun to wonder if his arms were attached backwards at the joint."