"From Whale to Jail?" 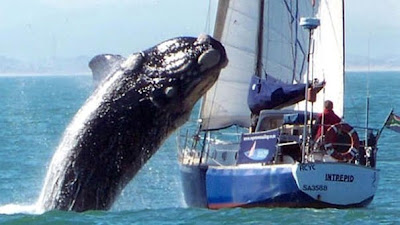 "First a whale jumps on and crushes your boat. Then you face the prospect of two years in jail or more than $40 grand in fines. Could it get any worse?

Photographs and later a video surfaced last week showing a 33-foot southern right whale soaring out of the water off Cape Town, South Africa, and landing on a couple's boat, nearly destroying it.

But the incident was more than just a freak accident. On Friday a spokesman for the local environmental agency confirmed to FoxNews.com that his group is investigating reports that the boat owner was harassing the whale -- and he could face harsh fines and even jail time if found guilty."