"Tensions on the Korean peninsula" 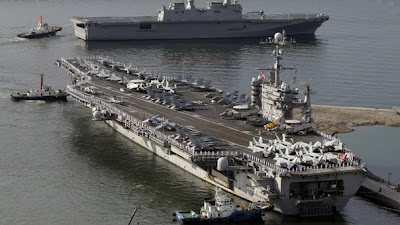 "The George Washington, one of the biggest ships in the U.S. Navy, is a potent symbol of American military power, with about 5,000 sailors and aviators and the capacity to carry up to 70 planes.

"North Korea may contend that it is a provocation, but I would say the opposite," he said. "It is a provocation to those who don't want peace and stability. North Korea doesn't want this. They know that one of South Korea's strengths is its alliance with the United States."

He said North Korea's threats to retaliate were being taken seriously.

"There is a lot they can do," he said. "They have ships, they have subs, they have airplanes. They are a credible threat."