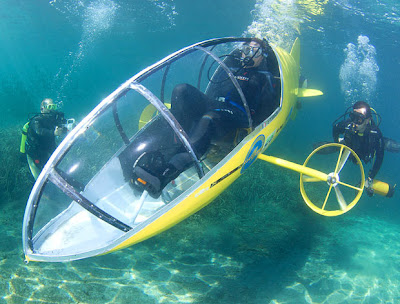 "Stephane Rousson of France controls his Scubster, a pedal-powered submarine, in Villefranche sur Mer, near Nice, southeastern France. The streamlined carbon fibre Scubster, built by Rousson, can travel at 10km/h (6.2mph) speed 5 metres (16 feet) below the surface of the sea. The Scubster team will take part in next year's International Submarine Race, which is scheduled to be held at the Naval Surface Warfare Center-Carderock Division, Bethesda, Maryland between June 27 and July 1, 2011."