Posted by Mark Scott at 7:53 PM No comments:

Posted by Mark Scott at 7:34 PM No comments:

...supplies and disaster management personnel flies over the island of American Samoa, September 30, 2009. A series of tsunamis smashed into the Pacific island nations of American and Western Samoa killing possibly more than 100 people, some washed out to sea, destroying villages and injuring hundreds, officials said on Wednesday."

Posted by Mark Scott at 6:50 PM No comments:

Cut and Walk From Afghanistan?

"The gist of Gen. Stanley McChrystal's analysis that presumably will be presented to President Barack Obama is: If 1) you and Congress fully resource the effort (troops, materiel and civilian aid) and 2) if we get much better at coordinating all our assets — Defense and State departments, the U.S. Agency for International Development, intelligence, contractors, NATO and others — then 3) there is a better than even chance of success in Afghanistan, which will take 4) between five and seven more years. Note that the president is not likely to be told that the Pentagon can "predict" success — only that it would be more likely than not to succeed."

Paying tribute to the wrong Deity?

The President as Pitchman: It Isn't Pretty

"President Obama demeans the office of the presidency by traveling to Denmark, where he will reduce himself to the role of Billy Mays pitchman in the U.S. bid to win the 2016 Olympic games for Chicago.

The greatest asset a president of the United States has is his credibility and his time. I know because I had the privilege of being the "gate keeper" for President George W. Bush.

I was Deputy Assistant to the President for Appointments and Scheduling, Vetting and Research. I was responsible for Mr. Bush's time management and planning. As such, I was acutely aware of how valuable and important the time of the president of the United States is."

Woman Fries and Eats Pet Goldfish After Fight With Husband

PASADENA, Texas — "Authorities say a Houston-area woman who was burned up at her former common-law husband fried their pet goldfish and ate some of them."

Posted by Mark Scott at 9:01 AM No comments:

Posted by Mark Scott at 8:49 AM No comments:

Posted by Mark Scott at 8:46 AM No comments: 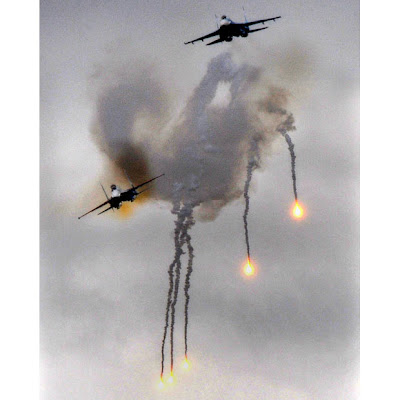 Posted by Mark Scott at 8:17 AM No comments:

"One of the fundamental questions that arises in politics is all about timing: what did someone know and when did they know it? According to news reports released last week, the "revelation" regarding a second nuclear facility constructed by Iranians in the holy city of Qom was anything but. Many sources say Western nations have know about the facility for "months." Others say say the United States has known about it for over a year. Still others say Western intelligence sources were aware of it as soon as Iran began construction back in 2006."

Posted by Mark Scott at 8:03 AM No comments:

A Pragmatic Look at Obama's Pragmatism

"When said we could just 'muddle through' in , I argued for more resources and more troops to finish the fight against the terrorists who actually attacked us on 9/11, and made clear that we must take out and his lieutenants if we have them in our sights," thundered as he accepted the Democratic nomination for president in last year. " likes to say that he'll follow bin Laden to the gates of Hell. But he won't even go to the cave where he lives."