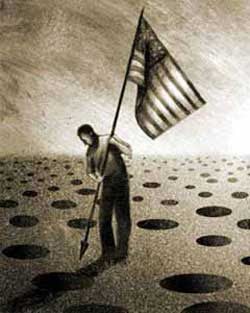 "If Bob Burns is correct, terrorists may betray themselves someday by jiggling on a Nintendo Wii balance board, blinking too fast, curling a lip like Elvis — or doing nothing at all.

Burns and his team of scientists are researching whether video game boards, biometric sensors and other high-tech devices can be used to detect distinct nonverbal cues from people who harbor "mal-intent," or malicious intent.

"We're looking pre-event," said Burns, the No. 2 at the Homeland Security Advanced Research Project Agency, a counterpart of the fabled Pentagon agency that developed Stealth aircraft and the Internet.

"We're trying to detect a crime before it has occurred.""