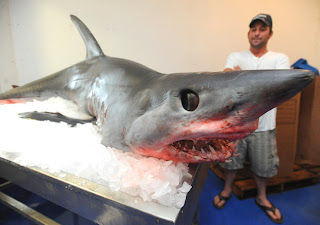 "Steven Prejean, a fisherman at Captain Mark's Seafood in Freeport, Texas, looks down over a 375 lb Mako shark, after he and two other fellow fisherman had a run-in with the shark while fishing. The three men had been cleaning fish on their boat and discarded some of the guts in the water when the Mako shark jumped into the boat and joined them. Kresse said he and his crew couldn't get close to the 375-pound fish to toss it back in the water. It damaged the boat before dying several hours later."