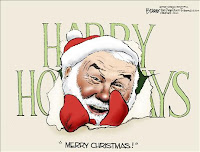 "World War II has ended, and somewhere in central Europe, a solitary figure, his clothes in tatters, carefully walks around the piles of rubble and broken glass on the streets of a once-bustling city now lying in ruins. The few still-upright walls, their windows and doors blown out, appear as skeletons framed against the blue sky. No one knows this boy's age, his name, or to whom he was born. After the death of a woman he had lived -- perhaps a relation, but perhaps not -- he was on his own.

His daytime hours were spent in the never-ending pursuit of surviving for another day."