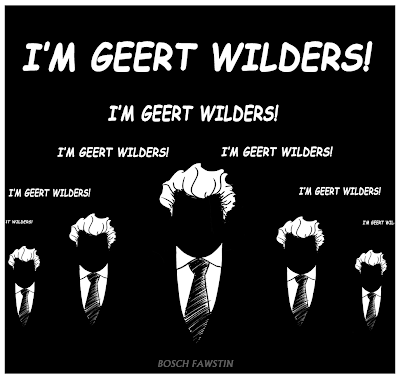 As many sane people know, Geert Wilders is NO racist. He is simply against out-of-control immigration; and against immigrants who won't assimilate; and the ones who beat Gays and rape non-Muslim women for not being covered up. He is also very much against the ones who kill their own daughters and sisters for their 'family honor'.
.
absurd thought -
God of the Universe says
don't criticize religions

.
here's an absurd thought -
your Supreme God knew
Jesus as a pedophile

and a raping terrorist
converting slaves by the sword
.
Muslims are not a 'race' anyway, they are followers of a religion/ideology and its Sharia Law. Most Muslims aren't even Arabs, which by the way, is also not a 'Race'.

But their duty is, according to their Koran, to spread Sharia law over the whole Earth. It might take 100-200 years, if they succeed.

We all should read the Koran, but be careful, for some strict Islamists prohibit non-Muslims from having or holding one. Also, it is only 'official' in Arabic, and some Muslims say Non-Muslims can't understand it. I wonder why.

This is BIG, this is REAL BIG! SPREAD THE WORD to the world everyone! The EU Mandarins have crossed the line! If this goes to court, how much more of the public will become aware of this tyranny?
All real freedom starts with freedom of speech. If there is no freedom of speech, then there can be no real freedom.

The Christians and Jews don’t riot when somebody makes fun of Christ or Jews. People must learn to be civilized, and held to account when they are not. Muslims included.

Geert Wilders is a hero spreading the painful truth. He MUST be protected!
.
here's an absurd thought -
your Supreme God says
Christians are a race

who love the Jewish race
and the peaceful Buddhist race

.
absurd thought -
God of the Universe wants
Sharia Law for ALL

.
absurd thought -
God of the Universe says
decide to change your race

just simply change religions
your religion is your race