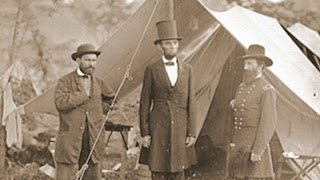 Typical revisionist BS. Lincoln would have let the South go, had they not fired on Fort Sumter.
The Confederacy is the ultimate example of the Democratic Party being outraged the results of a legitimate election did not go their way. On a playground we would call this "taking their ball and going home"
But a couple questions: If the Slave States were just Americans seeking independence, why did they need a new Constitution? Wouldn't the one they had be fine, if it was just 'adhered' to in their eyes?