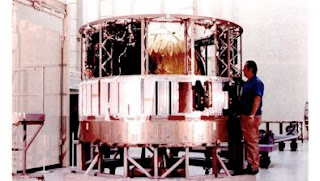 "He describes the white-hot excitement as teams pored over hand-drawings and worked on endless technical problems, using "slide-rules and advanced degrees" (there were no computers), knowing they were part of such a complicated space project. The intensity would increase as launch deadlines loomed and on the days when "the customer" — the CIA and later the Air Force — came for briefings. On at least one occasion, former President George H.W. Bush, who was then CIA director, flew into Danbury for a tour of the plant."